The art of wet shaving originated centuries ago, where skilled barbers offered grooming services with straight razors (also known as cut throat razors). Today, the art of personal grooming has since been brought to our own homes.

For many, personal grooming isn’t just a ‘personal’ choice, but instead, a routine that they’ve come to love. Young boys have watched their fathers pick their brushes, form foamy lathers, and positioning the blades at a precise angle to achieve the closest shave. In the eyes of their sons, wet shaving was a ritual that marked their foray into adulthood.

Though some may have forsaken the art of a wet shave for a quick, dry shave, there is a growing number of gentlemen who’ve not only grown accustomed to grooming themselves every morning, but are die-hards who believe that the first shave can very much set the tone for the day.

While wet-shaving demands time, and a certain level of vigilance when handling a cut-throat razor in the morning, the results will always be worth it. Coupled with the right after-shave lotions and fragrances, it’ll leave you smelling, and feeling like a million bucks.

Italian poet Attilio Bertolucci once wrote of the city Parma, “As a capital city it had to have a river. As a little capital it received a stream, which is often dry."

Well, quantity be damned. There must be something about its waters, as aside from becoming a mecca for food, art and architecture, Parma has birthed a fragrance synonymous with Italian savoir-vivre. Since 1916,
Acqua di Parma has produced fragrances, grooming and home products for the discerning crowd. Its popularity heightened in the 1950s, when jet-setting elites like Audrey Hepburn and Cary Grant discovered quintessential Italian elegance within the Art Deco bottles. Four decades later, three influential Italians — Diego Della of Tods, Luca Montezemolo of Gerrari and Paolo Borgomanero of La Perla — breathed new life into the brand, propelling it to greater heights with rebranding and the creation of new lines.

Today, Acqua di Parma enjoys the fuits of its labour with its Italian Resort and Colonia fragrances, and the Barbiere collection, that comes with a wenge wood shaving razor and brush.

Apart from face restoring kits and exfoliating water, the company also produces a preservative-free shaving cream, with a hint of Tobacco toscano fragrance. For men who prefer a single-step solution, look to Crema Pre-Dobo Barba. The Melograno-scented cologne can be used as a pre-shave, shaving cream, and after-shave.

If there’s any indication
D. R. Harris has been doing things right, consider its Royal Warrants for Her Majesty The Queen and His Royal Highness The Prince Of Wales. Since 1790, the pharmacy has been quietly serving the British gentry on its St. James Street premises, while steadily gaining an international following thanks to availability in First Class on British Airways.

Cult favourites are aplenty. Its triple-milled Arlington shaving soap is distinctly British, with a blend of citrus and fern with lemon and neroli, while the much-coveted Crystal Eye Gel contains cucumber extract, witch hazel, and rose water to rejuvenate tired and heavy eyes. A review of the Arlington cologne says it best, “Light, well behaved, gentlemanly — perfectly in line with the St. James/Jermyn Street ethos: quality, tradition and value."

The pre-eminent voices of the sartorial world swear by
Pankhurst. Alex Bilmes, editor of British Esquire magazine even claimed he’d rather go bald than anywhere else. Part speakeasy, part gentlemen’s club, the chaps at Pankhurst guarantee a proper shave and trim experience like no other. Comfort is key, and you know they take it seriously when their barbers’ chairs are upholstered with leather from Bentley Motors.

Pankhurst’s small range of grooming essentials have garnered huge acclaim. Every product, from its Head To Toe shampoo, Ice Gel aftershave, and award-winning Styling Conditioner is fragranced with their signature bay rum and lime scent — a masculine-scented concoction common among 16th century swashbucklers of the Caribbean.

Some love it. Others abhor it. Such is the polarised response for
Czech & Speake’s No. 88 collection. But one thing everyone can agree on is that despite the scent being dark, different, and somewhat feminine, it still manages to evoke the strength and mystery of a man. The base, heart and top notes are one aplenty; fresh bergamot, geranium precede dark rose, and exotic frangipani fuses beautifully with buttery sandalwood and vetiver.

The brand’s fragrances complement its range of wet shaving and grooming products. Pictured above are just some of their grooming sets, the Zebrano Wood shave set, and the Air-Safe manicure set. While some may raise eyebrows over the latter set and question its necessity, Czech & Speake believes that luxury isn’t just about items that money can but, but also having one less thing to worry about.

Sniffing out Atelier Cologne's modern take on an old-fashioned fragrance 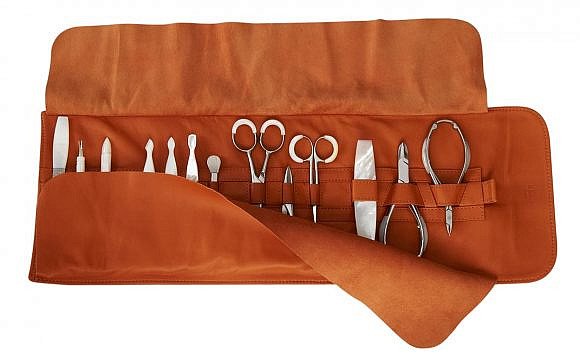