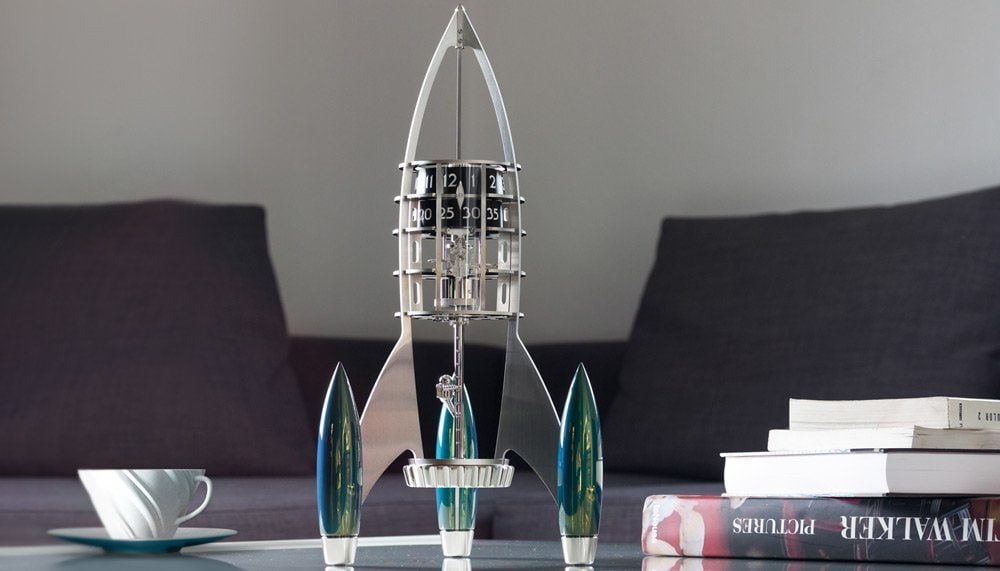 Unlike most rockets, it didn’t take the combined brain power of a team of Nasa geniuses, millions of dollars, and what felt like almost as many years, to build the MB&F Destination Moon. The machine also wouldn’t survive a trip to the moon, despite indications given otherwise by its name. What it did take, however, was a sleepless weekend in the life of one Nicolas Bringuet, a movement designer at Swiss clockmaker L’Epee and self-confessed sci-fi rocket enthusiast. And what the creation is made to survive, is the rigours of its owner’s active imagination.

The result of Bringuet’s abovementioned sleepless weekend was a table clock movement with an eight-day power reserve inspired by rockets. It has a distinctive vertical architecture, powered from below (just like rockets are) by an oversized winding crown and topped with a time-setting knob. Time telling is achieved by two discs, with the one marked with the hours laid above the one giving the minutes. A rod connects the movement to the winding crown and transfers power between the two. L’Epee brought the design to long-time collaborator MB&F, proposing that a rocket’s body be built around the movement.

True to the firm’s penchant for playful design and nostalgia, MB&F put perforations in the movement plates so they resemble the components of Meccano building toys, turned the connecting rod between the crown and movement into a ladder, and to complete the rocket, elevated it all on three landing pods, which together, do double duty as a heavy base that ensures the creation will stand steadfast on any desk.

As a final touch to the MB&F Destination Moon, Neil, the solid silver and stainless steel astronaut was put in command of the rocket. Dressed in a 1960’s-style space suit and attached by a magnet to any part of the “ladder", he is prepared to be the willing sidekick in any man-child’s imagination, whether it is back to childhood’s carefree role-playing space adventures, or futuristic missions to infinity and beyond.